I regularly talk with people about reconciliation in Australia.  We talk about respect, about healing, about empathy.  We talk about Treaty and about constitutional recognition and other ways we all can move forward as a united Australia.

One thing that pops up time and time again is a type of proposal or suggestion that Aboriginal Elders and people come together to create some kind of unified document of what the Aboriginal community believe is the next step in the reconciliation process.  Like they have in other countries around the world with indigenous populations.

This document is called the “Uluru Statement from the Heart” and seeks three things from the Australian Government which are:

1. Constitutional Reform to empower Aboriginal people to have their own self-determination.

“When we have power over our destiny our children with flourish.  They will walk in two worlds and their culture will be a gift to their country”

– Uluru Statement from the Heart

2. Establishment of a First Nations Voice in the constitution where it will be protected and respected.

3. Formation of a Makarrata Commission who will supervise agreement-making between governments and the Aboriginal people. It will also undertake a truth-telling process about Australian history.

{Makarrata is a Yolngu word meaning “a coming together after a struggle”.}

The most common response I get at this point is… “How come I have never heard of it?”.

…That, my friend, is the question!

But before I get into that, I’d like to expand a bit on the three points above.

The constitutional reform that the Uluru Statement From the Heart speaks of, is one of the empowerment of Aboriginal people.  Where their self-determination is recognised by Australia and its governments.  This relates to Articles 3 & 4 of the United Nations Declaration on the Rights of Indigenous Peoples  (UNDRIP).  As well as Article 9, 11-14, 21, 23,-24, 31-32 and 35 of the Declaration.

Article 3
Indigenous peoples have the right to self-determination. By virtue
of that right they freely determine their political status and freely
pursue their economic, social and cultural development.
Article 4
Indigenous peoples, in exercising their right to self-determination,
have the right to autonomy or self-government in matters relating to
their internal and local affairs, as well as ways and means for financing
their autonomous functions.

Due to Australia’s democratic style government, and the small population of Aboriginal people, it’s often difficult to get a seat at the table when discussing matters that directly affect Aboriginal people and communities. The following short video gives a quick description of why this voice is needed and how it might operate.

This proposed, voice in parliament also aligns with Article 18 of the United Nations Declaration on the Rights of Indigenous Peoples.

Article 18
Indigenous peoples have the right to participate in decision-making
in matters which would affect their rights, through representatives
chosen by themselves in accordance with their own procedures,
as well as to maintain and develop their own indigenous decisionmaking
institutions.

The Uluru Statement From the Heart states.

“Makarrata is the culmination of our agenda… It captures our aspirations for a fair and truthful relationship with the people of Australia and a better future for our children based on justice and self-determination.”

It will be a body that will supervise agreements between Aboriginal people and governments and will lay the foundations for future treaties.  This is supported by Article 37 of the United Nation.

So why haven’t you heard of the Uluru Statement from the heart?

The long and the short of it is, it was rejected by the Turnbull Government, therefore you didn’t get an opportunity to have your say about it.  Almost four months after the Referendum Council delivered their report to parliament, this media release was published on behalf of the Prime Minister, Attorney-General and Minister for Indigenous Affairs.

Admittedly, the news media did cover this story to some extent, though, from what I saw, it was quite an unbalanced representation.

The main concern that the Turnbull government had was that the this proposed voice to parliament would turn into a third chamber of parliament (supplementary to the House of Representatives and the Senate).  Even after the Referendum Council assured that…

the proposed body would have insufficient power if its constitutional function was advisory only.

I’m not sure the Turnbull government fully understands the purpose of an advisory body nor how the constitution mandates that body’s powers.

Here, is where numbers get interesting.

Yes, I absolutely agree that all Australian’s should have equal civil rights.  And one vote for one person, in my view is the fairest way we can do this when we are speaking about topics that affect all Australians.

However, there are not equal civic rights when 97% of the population are able to vote on things that will ONLY affect 3% of the population (that is the Aboriginal community).  This is why it is important to have an advisory council, where the members from both the House of Representatives and the Senate can seek advice on the real impacts that decisions would have on Aboriginal people.  Without that deep understanding of culture, kinships, lore and more, unwillingly and unknowingly governments and the Australian voters can severely harm Aboriginal communities and further widen “the gap” that we currently have Australia.

With a number of key performance indicators showing results that “the gap” results only have three of the seven national targets on track. And having seven of the eight states and territories on track for two (or less) of the seven targets in 2018.

Just look at all those unachieved targets in the picture below.  Isn’t this enough evidence to suggest that the way it’s currently being run… IS. NOT. WORKING?! 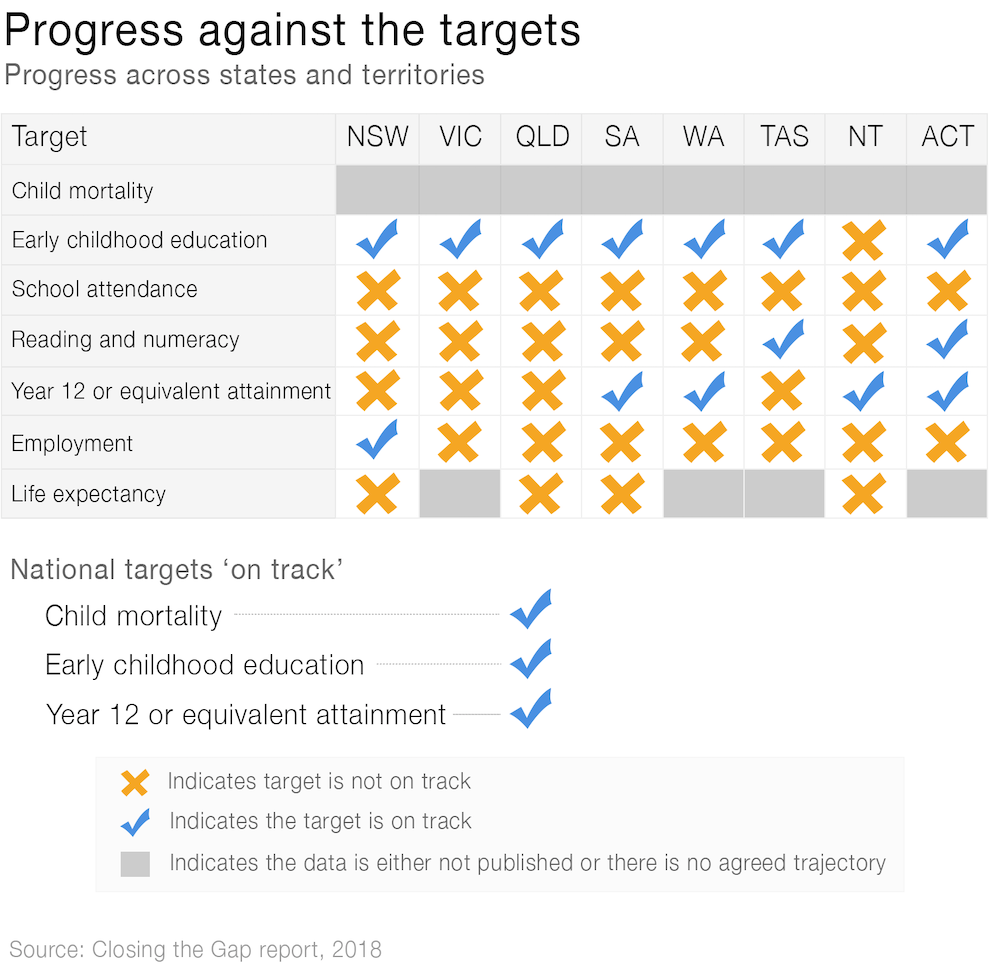 When you have Australian first nations people saying that they feel voiceless and powerless in their own country and homeland, isn’t that evidence enough to realise the system needs to change? And maybe substantial constitutional reform is required (not desire but REQUIRED!).

This message from the Aboriginal community is not a new one.  It is one that has been formally lobbied since the late 1930’s.  The foreword from the Co-Chairs of the Referendum Councils Final report says:

Aboriginal and Torres Strait Islander peoples have long struggled for constitutional recognition. As farback as Yorta Yorta elder William Cooper’s letter to King George VI (1937), the Yirrkala Bark Petitions(1963), the Larrakia Petition (1972) and the Barunga Statement (1988), First Peoples have sought a fair place in our country.

Now, with the new Prime Minister Scott Morrison leading the Liberal party, one interesting thing has occurred.  The Turnbull government rejected the proposal of an Aboriginal voice into parliament.  The Morrison government wants a “Special Envoy for Indigenous Affairs”.  It seems there is an understanding that a middle body is required between the Aboriginal community as a whole and the government. Just as there are bodies in between the Australian population and the Senate. However, this middle body the “Special Envoy”, has been created and the position filled without any consultation from the community it’s designed to communicate with.

The definition of an Envoy according to the Cambridge Dictionary  is:

Plus, an Envoy is usually used for diplomatic processes.

Three questions come to mind when thinking about this:

The Special Envoy for Indigenous Affairs position was offered to former Prime Minister Tony Abbott, by Morrison.  Abbott accepted the position to the horror of many Aboriginal people.

It is no secret that Abbott is not a favourite within the Aboriginal community.  With many not willing to speak with him.  Especially after Abbott approved the forced closure of 150 remote communities saying that the government shouldn’t have to fund the “lifestyle choices” of the remote community members.  Since Abbott’s appointment as Special Envoy for Indigenous Affairs, there have been calls from the Aboriginal community to build an “Abbott proof fence”.

Abbott justified to community closures by saying that:

“It is not unreasonable for the state government to say if the cost of providing services in a particular remote location is out of proportion to the benefits being delivered,”   –Tony Abbott

After removing all the fluffy bits and all the political verbal vomit, this is essentially what is being said:

We [the Australian Government] no longer feel that it is our responsibility to provide funding to communities of people living in remote areas.  They can move to a more populated town or city, even if that means that they are no longer on country.  We don’t understand why the remote Aboriginal countrymen and women live on country nor why it is important that they remain there.  We do not understand or respect their culture or acknowledge that their culture and lore is the first of this land.  We also don’t recognise that the culture or lore is still fully operational.  We do not understand the impacts of the last two hundred years and that remote living cannot be done as it was prior to colonisation.  We do not respect that communities need time to heal, regroup and reestablish how to run a community without having some financial support go into communities to build the foundation. We do not acknowledge that this has taken around two hundred years to get to this point.  We do not have the initiative to empower these communities to return to their former glory.  To empower them with self-determination and to allow them the human decency to have a say in matters that directly relate to them.  We have decided that if countrymen and women of these remote communities continue to live in remote areas, we will no longer care for their physical, mental or spiritual wellbeing like we do for the rest of the Australian people.

But that’s just me, reading between the lines.

In closing, I’d like to bring your attention back to the Uluru Statement from the Heart which concludes with an invitation to all Australians to walk with Aboriginal people for a better future and this short statement…

Are you open to listening?

I am really interested to know a few things from you.  Have you heard of the Uluru Statement form the heart?  Do you think these are reasonable requests?  Are you interested to find out more? Please leave a comment below.

The Conversation – Listening to the heart: what now for Indigenous recognition after the Uluru summit?

United Nations Declaration on the Rights of Indigenous Peoples

The Uluru Statement from Heart, One Year On: Can a First Nations Voice Yet be Heard?

8 thoughts on “Have You Heard of the Uluru Statement From the Heart?”

Come Join me on Facey

Come Join me on Facey

There was an error retrieving images from Instagram. An attempt will be remade in a few minutes.